Hamburg heart surgeons are making history with new developments in minimally-invasive heart surgery. Earlier this year, heart surgeons at the Asklepios clinic Hamburg Harburg closed an auricle using new, minimally-invasive surgical techniques. More recently, in an experimental procedure, heart specialists at the University Heart Center (UHZ) in Hamburg replaced a defective mitral valve with an artificial one. The procedure was successful for both of the patients it was performed on. 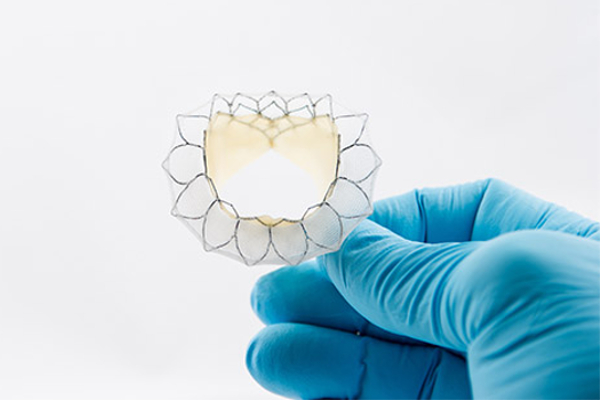 Mitral valve insufficiency is a common heart condition in which one of the heart’s four valves fails to close all the way, resulting in a backflow of blood. As a result, patients may experience severe fatigue as oxygenated blood fails to circulate effectively throughout the body.

Most commonly, this condition is treated with open heart surgery. A team of doctors and heart surgeons place the patient under general anesthesia, open the chest, and stop the heart in order to operate on it. The surgeons stitch together the flaps of the mitral valve to tighten it so it no longer leaks when it is fully closed.

But for elderly patients and people with co-morbidities, open heart surgery is considered too risky, and different types of treatment are required. For several years now, high-risk patients could benefit from the MitraClip, a small metal device that clips the flaps of the leaking valve together.

But the MitraClip is not a perfect procedure: according to Dr. Ulrich Schäfer, Executive Head of Department of Cardiology at the UHZ, only 10 percent of patients who undergo the procedure see their mitral valve leakage completely eliminated. Schäfer said 40 percent still have a low grade of mitral leakage, and 20 percent experience a high grade of leakage.

A complete valve replacement could fix this issue – after all, artificial valve replacement has worked extremely well in other heart valves, such as on the aortic valve with the TAVI procedure. But because of the complex anatomy of the mitral valve, medical technology developers have had trouble constructing an artificial mitral valve that could be implanted via catheter – until now.

May 10 – a 72 year old Hamburg woman received a mitral valve replacement at the UHZ. The device is called Tiara and is produced by the Canadian firm Neovasc.

The team of doctors did not open the chest – they implanted the device with the help of a catheter through a four-centimeter incision between the patient’s ribs. The woman is now at home and doing well.

“She was already doing much better on the very next day. Due to the new heart valve, the blood can flow freely again towards its destination,” said Schäfer. He performed the first operation along with Prof. Hendrik Treede from the Uniklinik Halle.

Just weeks later, Schäfer performed a second successful operation on an 85-year-old Hamburg woman working together with the heart surgeon Dr. Lenard Conradi from UHZ. A third operation is planned for later this month.

The procedure is still considered experimental and the team of doctors had to get special permission from the Federal Institute for Drugs and Medical Devices. If doctors can show the procedure is safe and effective, the device will undergo scientific studies before it can get CE-approval.

With Germany’s aging population, the number of people living with heart conditions who are too fragile to undergo open heart surgery has increased. This has lead to a rise in innovation for minimally-invasive and catheter-assisted procedures, including heart valve replacement. At least six companies worldwide are developing and testing artificial mitral valves, and while many are in trial stages, so far none have been approved by the CE or FDA for general use.

Because catheter-assisted cardiac procedures are only performed on patients who are not candidates for open heart surgery to begin with, it is hard to say whether these artificial heart valves will allow patients to live longer. Still, for people suffering from the extreme fatigue and weakness associated with mitral valve leakage, it can make a world of difference.

For Prof. Hermann Reichenspurner, Medical Director at UHZ, the benefits of such procedures are clear: “Above all else, it’s about improving the quality of life for the patient.”