Little Lotte was born in the Netherlands with a serious heart defect. After being rushed to a specialized heart center in Berlin, German heart specialists were able to perform open heart surgery and save her life - all without the use of donated blood. 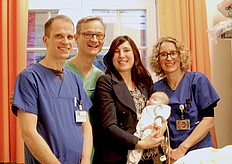 In the 20th week of pregnancy, Dutch woman Margriet Wiersma-Vrolijk learned that her daughter Lotte had Down syndrome, as well as an “atrioventricular septum defect,” a birth defect where there is a hole in one of the walls separating the different chambers of the heart.

“Of course it was a big shock at first, but we accepted it quickly. And Lotte’s heart defect had to be operated – but a few months after her birth, they told us.”

Lottes parents decided to bring their daughter to a specialized German clinic, the German Heart Center Berlin (DHZB) for the surgery, despite the 700km journey. “We believed that Lotte needed to have the operation in a few months and that we would be able to take our time to prepare ourselves for the journey,” said Margriet.

Emergency surgery on the day she was born

But something else happened. Immediately after Lotte’s birth in the Netherlands, it became apparent that the congenital heart defect was much worse than expected. A major artery, the aorta, was interrupted, meaning that Lotte’s body was barely receiving any oxygen.

Suddenly things happened quickly. Already on the first day of her life, Lotte was rushed to the DHZB. A team of German doctors rushed to save her life.
To complicate matters, Lotte’s heart would have to be stopped during the surgery and a heart-lung machine would keep oxygen flowing through her body. This machine would have to be “filled up” beforehand – otherwise it would pump air into the body and not blood.

Earlier, such operations would require donated blood, which – despite careful screening – always has the risk of infection or of being rejected by the body.

Today, a sterile electrolyte solution is typically used in place of donor blood. This causes a thinning of the blood, which, for adult patients, is known to be harmless. But on newborns and small children, it can have a more drastic effect: in such small bodies, usually only a few hundred milliliters of blood are circulating. In these cases, it is usually necessary to fill the machine with donated blood – despite the risks.

Founded in 1986, the German Heart Center Berlin is one of the most important specialized heart centers worldwide.  The DHZB is an interdisciplinary heart center where surgeons, pediatric cardiologists, anesthetists and heart-lung machine technicians work closely together with the developers of the equipment, and have done so for many years in order to develop techniques to use the machine to make blood-free operations on newborns possible. It is one of the few heart centers worldwide that uses this medical system routinely and without safety risks.

“With this, we’re not just minimizing the infection and rejection risks. We are also enabling our patients to heal faster after the operation,“ said Prof. Dr. Joachim Photiadis, leader of the Clinic for Children’s Heart Surgery at DHZB.

Two days later, Dr. Photiadis and a team of German heart specialists were able to correct the heart defect on the tiny patient. The six-hour surgery was successful.

“That we were able to complete such a complex operation without the use of donated blood was the result of many years of nonstop teamwork,” said Dr. Photiadis. “We’re all quite proud of ourselves.”

Lotte had to be monitored in the hospital for several weeks following her surgery, although she healed quickly. She was able to be released from the DHZB and go back to Holland with her parents, where her five siblings were waiting for her.