The Asklepios Klinik Wandsbek in Hamburg, Germany has been renovated into one of the most modern hospitals in northern Germany. In the latest wave of expansion and modernization, it recently opened the doors to nine new high-tech operating rooms and a neonatal intensive care unit. All of the units are outfitted with cutting edge technology, some of which is the first of its kind in Germany. 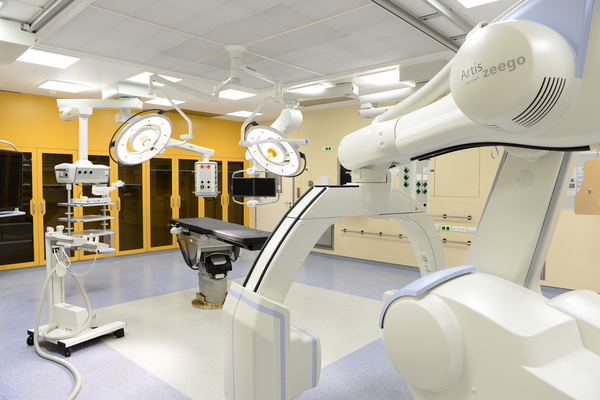 “The Asklepios Clinic Wandsbek is a central healthcare provider in the most heavily populated neighborhood of our city,” said Cornelia Prüfer-Storcks, Senator for Health and Consumer Protection, at the opening ceremony. “We have a major interest in the fact that the clinic will be fundamentally modernized in order to improve the care we provide to patients.”

For the new operating units, a total of €30 million were invested, including €22.4 million from the city of Hamburg.

The new operating rooms are equipped with new technology which doctors say will increase the safety of the patients.

New hybrid operating rooms allow diagnostics and procedures to take place in the same room, meaning the patient doesn’t have to be moved if a doctor decides an operation is necessary. This lowers the risk for hospital-acquired infections.

A new robot-assisted X-ray arm that can circle around the patient provides improved image quality while exposing the patient to a lower dose of radiation.

And two of the rooms are equipped with new “4K-resolution” monitors with image resolution that is four times as high as that of a high-definition television – the first of their kind in Germany.

Dr. Thomas Wolfram, CEO and spokesperson of the Asklepios Group, explained the significance of the imaging technology in his speech at the opening ceremony.

“Our operating surgeons can now work under conditions that don’t exist in this form in any other clinic in Germany,” he said. “With this trueness to details, we can see nerve fibers and lymph nodes extremely well. Even tumor tissue is much easier to recognize, thanks to the improved graphics and colors, so you can operate more precisely and safely.”

A new neonatal intensive care unit hopes to improve care for the youngest patients at the Hamburg clinic. The delivery and post-natal units have been renovated to improve patient comfort and safety, and a new C-section operating room completes the center. The new facilities are even equipped to deal with a sudden breech birth, when a baby is born bottom-first instead of head first – something that was, until now, only possible in very few Hamburg clinics.

Part of an ongoing wave of hospital expansion

The Asklepios Klinik Wandsbek is one of the fastest-growing hospitals in Hamburg, and it expects the number of patients to continue growing. More than 6,000 in- and outpatient operations were performed at the clinic in the past year, and nearly 1,000 babies were delivered – 150 of which needed intensive care. The obstetrics department of Wandsbek recorded in 2015 the largest relative increase of deliveries of all Hamburg clinics.

The renovation of the Asklepios Klinik Wandsbek has been going on since 2011, and is expected to continue well into 2017. With a total cost of €150 million, it has been transformed into one of the most modern hospitals in northern Germany and is part of the largest hospital construction project in Hamburg.

“With the dedication of the new surgical wings and the neonatal intensive care unit, we have reached an important stage of the comprehensive project,” said Senator Prüfer-Storcks.