One hospital in Berlin is putting patient comfort first: The Dominikus Hospital in Berlin Reinickendorf has received a new "open" MRI scanner. Unlike a traditional MRI, where the patient is enclosed in a narrow tunnel during the scan, this MRI has a wider-than-normal opening, reducing the feelings of confinement during the scan. 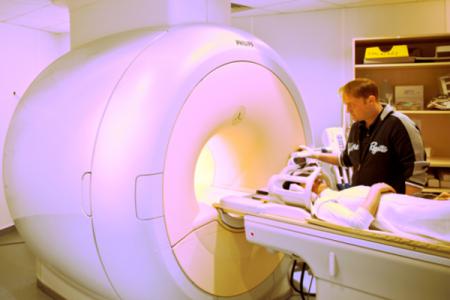 “We are talking about a so-called ‘open MRI,’ in which the feelings of claustrophobia are greatly reduced,” said Dr. Christian Nitzsche, Head of the Radiology Department. “This will make the examination much more comfortable for our patients.”

MRI scans have certain benefits in that they produce more detailed images than other imaging technologies. MRI scanners produce more detailed images than X-Ray or CT scans, and have the added benefit of not exposing patients to harmful radiation. Ultrasounds also do not involve radiation, but the image quality of an MRI compared to an ultrasound is much, much higher.

Traditional MRI scans can cause claustrophobia in some patients

A traditional MRI scanner is a long, narrow tube where patients must lie still, sometimes for 30 minutes or more, while the scan is taking place. This experience can be unpleasant for patients, particularly for those who suffer from claustrophobia. For patients who are pregnant, obese or broad-shouldered, a traditional MRI may not be an option at all.

New MRIs have been developed with patient comfort in mind. There are now several types of “open” MRI, which are designed to reduce patients’ feelings of confinement. Newer generations of the devices can often provide patients a more pleasant examination experience without sacrificing images quality.

Some devices, such as the new MRI at the Dominikus Hospital, have a wider-than-normal opening to provide patients more space and reduce feelings of confinement during the examination. Others “sandwich” the patient between two flat magnets but have open sides, allowing for more air flow and for the patient to be able to look out the sides. A third type, so-called upright MRIs, allow the patient to be examined in a sitting or standing position, which is not only more comfortable for patients, it may offer certain diagnostic advantages as well.

Read more about the different types of MRI scanners

The same image quality with less stress for patients

The new scanner at the Dominikus Hospital has a magnetic strength of 1.5 Tesla, which allows it to produce just as detailed images as a traditional closed MRI, and can be used to examine nearly all parts of the body. With a 70cm (2 ft, 3.5 inches) diameter, it offers noticeably more space than a standard MRI.

The MRI scanner in the Berlin hospital also has a much lower level of operating noise than a traditional MRI. This creates a much more pleasant environment in the examination room, said Dr. Nitzsche.

MRIs are a common feature of nearly all German hospitals and are also found in some outpatient clinics. The number of clinics with open MRIs is also growing, with the Dominikus Hospital in Berlin becoming the latest to join their ranks.