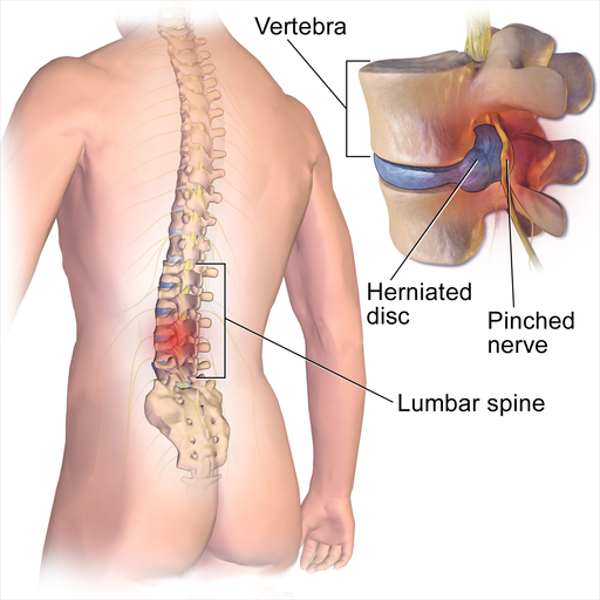 Discectomy, or disc removal, usually refers to removing the inner nucleus from a spinal disc. This is a common type of decompression spine surgery, a surgery meant to alleviate pain by relieving pressure on the nerves in and around the spine. Discectomy is most commonly used to treat back pain arising from nerve compression caused by a herniated disc. In some cases, discectomy may be able to relieve pain associated with spinal stenosis or spondylosthesis.

Major medical advancements in recent decades have lead to new techniques that are less invasive than traditional techniques, leading to shorter recovery times and less risk of infection.

Discectomy, meaning “disc removal,” involves a surgeon removing part or all of a vertebral disc, usually because it is putting pressure on a nerve and causing pain. There are three types of discectomy: classic discectomy, microdiscectomy, and pericutaneous discectomy.

Classic discectomy, a type of open surgery, is the technique that has been around the longest. Also called open discectomy, in this procedure the surgeon makes a large incision through which they remove all or part of the affected disc. With advances in less-invasive techniques, classic discectomy is becoming less common; however, in severe cases, this technique may be necessary to remove all of the damaged disc tissue and prevent symptom reoccurrence. This is typically performed under general anesthesia.

If the entire vertebral disc is removed, discectomy may be followed by a procedure such as artificial disc replacement or spinal fusion to restore stability in the spine.

Microdiscectomy involves the surgeon removing all or part of the disc nucleus through a small, one- or two-inch incision in the lower back. With the help of specialized instruments and modern imaging technology, the surgeon can see what they are working on even without exposing larger areas of the operating site. Microdiscectomy is usually performed as an outpatient procedure, and local or general anesthesia may be used.

The least invasive form of discectomy is called a pericutaneous discectomy and is typically performed as an outpatient procedure. In this case, the surgeon sucks out the affected disc material through a needle, cuts it out using a very small instrument, or destroys it using a laser. This procedure has the shortest recovery time and patients usually go home on the same day of the procedure – sometimes just a couple of hours later.

However, since the surgeon cannot see the affected area as well, there is a higher chance they might fail to remove some of the affected tissue and the problem may occur. Because of this, only a select few patients are good candidates for this type of surgery, and it is most effective in less-severe cases. Pericutaneous discectomy may be a good treatment option for some herniated disc patients, but it is not recommended to treat spondylolisthesis or spinal canal stenosis.

Sometimes a herniated disc will heal on its own, so patients should try several weeks conservative treatment before undergoing therapy.

However, some severe symptoms indicate a medical emergency and require immediate surgery. This may include leg weakness, incontinence, unexplained weight loss, pain so severe the patient cannot stand straight, or a fever with an increase in pain. Always contact a medical professional immediately if you experience any of these symptoms.

As with all open surgery, classic and microdiscectomy procedures include some possible risks. Some of the most common include leaking spinal fluid, nerve damage, incontinence, bleeding and infection. In addition, a small percentage of patients may develop a recurrent herniated disc in the future which may need to be operated on again. However, since microdiscectomy is a minimally-invasive procedure, the risk of complications and the average recovery time are significantly lower than those of classic discectomy.

The biggest risks associated with percutaneous discectomy are ineffectiveness of the treatment (i.e., failure to remove all of the damaged disc tissue).

Only a highly-qualified medical professional can determine which treatment option is best for each individual case. Premier Healthcare Germany has contact with several expert spinal surgeons in Germany who use the most advanced methods available to treat conditions causing back pain.

Contact us to learn more about spine surgery in Germany and to get in touch with an experienced German spine specialist.